I wouldn’t say this episode is timely, however it is a major accomplishment. It was recorded and posted in less than one week! Everything remains topical as of today.

This time, we discover together just how much of a slacker Kenny really is. Its been several years, and he still doesn’t know what a Re:Zero is. But don’t worry, I took him to school.

Also, we preview some of the stuff that looks interesting for Fall 2020. Spoiler alert: It isn’t much.

Double-also, we will be hosting Anime Jeopardy once again at DigiKumo, the digital version of Kumoricon happening this year, hosted exclusively on the World Wide Web! Expect the same amount of shenanigans as before.

That will be held from November 6th through the 8th. Don’t miss us! I’ll be beaming in my presence straight from Japan via satellite teleconference. 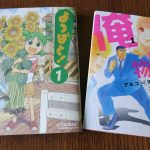